Book V. Movie: Harry Potter and the Goblet of Fire

With the final installment of the Harry Potter movie franchise coming out, we thought it would be fun to revisit the phenomenon with a special edition series of Harry Potter Book v Movie columns.

Name of Book: Harry Potter and the Goblet of Fire

Reason for Reading: It’s Harry Potter, do we need a reason? 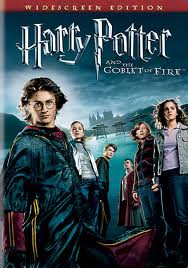 Name of Movie: Harry Potter and the Goblet of Fire

The BOOK: Did you catch the page count? 735 delicious pages.  Prisoner of Azkaban was larger at 435, but Goblet of Fire is nearly double that. This satisfied my insatiable appetite for all things Harry.

The series is getting more complex and dark. After three unsuccessful attempts to kill Harry and make a comeback, the worst has happened. Voldemort returns, setting up the remainder of the series.

Goblet of Fire is one of my favorites from the series, (The Half-Blood Prince being my second favorite.) Goblet of Fire brings us international wizards, the World Quidditch Cup, a wizard tournament with frightening challenges. Everything is taken up a notch in Goblet of Fire. All of Harry’s adventures heretofore, pale in comparison to what he has to deal with in year four at Hogwart’s.

And our heroes are growing up. The relationships are becoming more complex with the onset of puberty. Harry and Ron are fighting for a good chunk of the book as jealousy plays itself out.  Hermione and Ron’s friendship subtly shifts but they haven’t acknowledged it yet.

As this book was significantly larger than the previous three, there was a lot of cutting in the movie and rightly so. The pacing was quick and the creeping, menacing mood was captured well. The scenes at the end in the maze and the graveyard were especially well done. Seeing Voldemort come back was pretty creepy to witness. The part in the book that gives me chills and always makes me want to cry, is when Harry and Voldemort’s wands connect. The depiction in the book of Priori Incantatem is so moving and sad amidst a truly frightening moment. The depiction in the movie was nearly how I had imagined it and almost as moving.  The mood of the cheering crowd when Harry returns from the graveyard moves to jubilant to panic perfectly. Dumbledore’s speech to the school at the end is powerful.

One personal joy of watching the movies is seeing who will play the new teachers. Our young heroes are still young and their talent still being developed, but it is a true joy to watch the adult players. Brendan Gleeson was delightful to watch as abrasive, gruff Mad-Eyed Moody. Michael Gambon is coming into his own as Dumbledore. Predrag Bjelac is particularly sinister as Igar Karkaroff.

Overall, the movie version does a decent job of capturing the tone and turn of events of the fourth book.

THE VERDICT: The book by far exceeds the movie. At the time that it was released, I thought it was the best movie HP movie adaptation.  However, I always think that with each new HP release. 😉

5 Responses to Book V. Movie: Harry Potter and the Goblet of Fire