Nyx in the House of Night (thoughts) 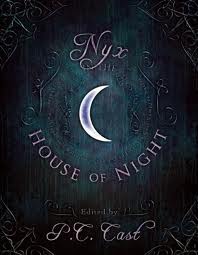 Name of Book: Nyx in the House of Night
By: edited by P.C. Cast
Publisher: Smart Pop (Imprint of BenBella Books)
Copyright Date: 2011
Number of Pages: 211
Format: essays
Reason for Reading: we love HoN
Rating: A

Source: Izzy was lucky enough to win an advanced reader’s copy during Armchair BEA. She kindly lent it to me after she finished.

Nyx in the House of Night (HoN) is a lovely little companion book. It is filled with various essays exploring the mythology and folklore that inspired the series. There are essays on vampire folklore, the history of the art of tattooing, the divinity of cats. P.C. and Kristin also have their say: P.C. talks about her research trips to Ireland and Scotland, the people and myths that inspired parts of the series, while Kristin defends Zoey’s multiple boyfriends and gives us the history of polygyny and polyandry. There is also a lovely essay about goddess worship by one of my favorite metaphysical authors, Yasmin Galenorn. Oh! And there is an essay by Bryan (Dragon) Lankford too. Lots of goodies for the die-hard fan in this slim book.

So, Izzy and I had a little chat.

jehara: i really liked it. it gave me a new appreciation for the series.
izzy: me too.  i think my favorite section was the bit on Tulsa, OK. i really liked learning more about zoey’s hometown and the main setting for books.
jehara: that was really cool. i have to say, i’ve never had any desire to visit OK. however, now i would like to visit tulsa after reading that particular essay.
izzy: there’s a link on pc cast’s home page that shows a lot of the spots in the series.
jehara: really? i will have to check that out.
izzy: let me find some linkage for you
http://www.houseofnightseries.com/tour-of-tulsa/
check it out real quick
okay, how much do you love that Street Cats is a real charity??
that’s fabulous

jehara: that is really cool

izzy: i really appreciate interactive websites like this where you can dig into your favorite character’s world a little more.

jehara: i like how they have incorporated things they love about their town into the story.

izzy: it helps give that edge of reality to the supernatural. i think i’ve said it before, but i love my paranormal to exisit in a world that is familiar to me. i like the idea that it could really happen. of course, i know it’s fiction, but what if is always fun.

jehara: yes it is.  i liked the appendix of names at the end of the book.
izzy: oh yeah, that was really neat
jehara: and their meanings
i love names that have symbolic meaning
it just enhances the story
oh! and how cool is it that bryan lankford is a REAL PERSON?
and Anastasia too?
and that he wrote an essay for the book?
izzy: right? kind of want to meet them, am i right?
jehara: i liked that he kept the persona of his character in his essay
you totally could
he lives in dallas
izzy: wouldn’t do it without you. 🙂
jehara: heehee
we’ll have to make a field trip next time i am back in town
hahah
ok
so
i just have to say
izzy: no, mr Lankford, we are most certainly not stalkers
jehara: the essay about vampire, vampyre, and vampi(y)re
was equally fascinating and ewww-inciting
izzy: SO MUCH
jehara: i was with it up until the vampi(y)re section
i tried really hard to be open-minded
izzy: i remember having a very visceral response when i read that
jehara: me too
it doesn’t help that i am naturally squeamish
izzy: oh yeah, and you are probably one of the most open minded people i know
jehara: the idea of real life witches doesn’t bother me and obviously witchcraft in real life is NOT like witchcraft in books
but real life vampires?
that was a stretch
izzy: it’s very squeam-inducing
jehara: i like the idea of true vampires existing
not in a predatory sense
but in the hey you could be immortal and have lots of powers way
but real people pretending to be vampires and drinking blood?
that is hard to digest
izzy: right, and only beneficial if you get to keep your soul
jehara: right
izzy: yes, it really is
jehara: it made me think of that buffy episode with her friend from her old high school
i forget his name
he is dying
izzy: oh right, right
jehara: so he wants to become a vampire

jehara: and there is that whole warehouse full of vampire wannabes

izzy: including the one dressed just like angel…  hee

jehara: hahahahahaha
izzy: yeah, the idea of drinking blood is a bit repulsive for me
although i do have a very pronounced left canine
😀
jehara: hahaha
one essay that i LOVED was the one about the cruithne (celtic) myths
izzy: yes!!
jehara: we learn about her trips to ireland and scotland
how she takes pieces of the history shared and weaves into the story
izzy: it made me want to go back and read that section again where she and stark are on the isle
i loved how she worked in the knot tree
jehara: i also love how she pays homage to her guide and assistant
izzy: how do they refer to that in the book?
jehara: she names the character after him
izzy: i loved the idea of that grove exsisting in both the otherworld and our world
jehara: and the clan that stark is a part of is a play on the clan of the real seoras
izzy: oh yeah, that was really cool
jehara: her fictional clan is named macuallis
which is a loose gaelic interpretation of wallace
which is seoras’s clan
i like that sgiach is based on a real person
izzy: yeah, i thought that was pretty cool as well
jehara: and that she visited the ruins of sgiach’s castle
izzy: had to be so much scope for the imagination there
seriously
i get in places like that are rich in history and i swear i can hear characters talking to me
obviously there was also a fantastic piece on nyx
jehara: yes
izzy: it kind of built upon what the benedictine nun told zoey
a lot of it made me want to go back and reread, especially the ones about tulsa and sgiach
i always have a picture in my mind when i read but the picture changed while i was going through the book
jehara: yes
i definitely wanted to re-read after finishing this book
so what about the tattoo essay?
izzy: refresh me on the tattoo essay (sorry, it’s been ages since i read…)
jehara: it gives the history of tattooing
how in cultures it has been used to mark rites of passage
to show rank and status
tattoos for spiritual purpose
and the essay writer shows how the casts use tattoos in these ways
to mark a rite of passage, to denote rank
i thought it was interesting to learn that p.c. has quite a few of her own
izzy: i remember now
most of the people i know with tattoos chose them very deliberately
to express something important to them
i love how lenobia, for example, has the horse tattoos
when her ability with horses is clearly a gift from nyx
jehara: i like how the tattoos are linked to each vampires personality and spirit
they are very personal
izzy: and they do denote rank-i mean look at zoey’s tattoos
and she is technically still a fledgling, albeit a high priestess fledgeling
jehara: absolutely
her tattoos very much show that she has nyx’s favor
and it also shows that zoey has been marked by nyx and given an important mission
even if those around her don’t grasp that meaning, it is there
izzy: right, it’s tangible evidence that zoey isn’t to be taken lightly
i like that you basically can’t argue with the tats
jehara: hahaha
exactly
were there any essays you didn’t like?
izzy: Not really
i took about three weeks to read the book
i wanted to take time in between to think about things
i liked how all of them hearkened back to the series
though i confess i could probably have done without first knowledge of living vampires
jehara: hahaha
that essay was so interesting for all the background on vampires myth and folklore
and how HoN adheres to traditional folklore more so than other vampire novels, which i was surprised by.
izzy: i was too!!
i liked that and i still love the native american mythology mixed in
jehara: it was really interesting to learn about in days of old because people didn’t know what happens to bodies post-mortem, they thought they were coming back
yes
the essays that expounded on cherokee mythology and the raven mocker legend
izzy: i honestly thought she’d made up the raven mockers but i should have known better
jehara: yeah, this book was full of tasty morsels
it really deepened my appreciation for the series.
izzy: so it’s a recommended book for HoN fans definitely-how about for non-fans?
jehara: hmmm
i think if non-fans are interested in paranormal stories it might intrigue them and make them curious about the series.
izzy: but it will probably be more appreciated by people who are current on the books since it’s so rich in detail
jehara: oh for sure
izzy: it’s like an extra on a DVD
a really cool extra
jehara: yes! but i think there is enough material to stand on its own to pique someone’s curiosity if they haven’t read the books.
izzy: yes, i think so too
especially if you are someone who tends to love history and folklore
jehara: yes
if someone isn’t into that, then obviously not the book for them

izzy: i like though and really isn’t it all about me? 😀

This entry was posted in Essays, Posts by Izzy, Posts by Jehara and tagged House of Night, P.C.+ Kristin Cast. Bookmark the permalink.

1 Response to Nyx in the House of Night (thoughts)