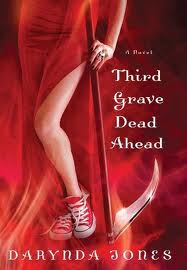 Reason for Reading: Devoured the first two books in one sitting while on vacation, snapped up the third one at the library last week.  Hilarious engrossing paranormal mysteries with absolutely no vampires or werewolves.

The Gist: Charley Davidson is a grim reaper; in point of fact, she is the grim reaper.  Minus the creepy cloak and scythe, put plus lots of attitude and moxy.  With her mad “I see dead people” skills, she parlays her super-secret identity into a career as a Private Detective.  In this, the third outing of Darynda Jones’ wicked sexy series, Charley has two mysteries to solve.  One, where oh where is the good doctor’s wife?  And two, what’s up with Reyes anyway?  Any more than that constitutes a spoiler I’m unwilling to share.

My Thoughts: I am in love with this series, a wildly funny, original take on ghost whisperers and “crossing over,” with an easy-to-root-for herione.  Charley is the kind of person I want for a friend-fiercely loyal, utterly fearless, confident, and kind.  She has plenty of faults; for example, some well-meaning people consider her fearlessness more akin to wrecklessness, plus when it comes to a certain unbelievably smokin’ hot son of Satan (yeah, that one) she has absolutely no good judgement or self-preservation skills whatsoever.  Not to mention, she’s a grade A smartass.

Of the three books in the series, this is easily my favorite installment.  In typical Charley Davidson fashion, I LOL’d all the way through, only to find myself weeping at the end.  The mysteries have some sneaky twists and the supporting characters are almost as awesome as Charley herself.  Keep an eye for Cookie, Charley’s lovable underpaid receptionist/research assistant/bestest friend as well as the continual character development of skip tracer extrordinaire, Garrett Swopes.  And Reyes.  Sigh.

Bottom Line: Highly recommended to fans of the paranormal as well as fans of good mystery of the goofy, sexy, sassy Janet Evanovich variety.  Though technically classified as a paranormal, I found it in the mystery section of Barnes and Noble.  One caveat: I really recommend reading in order.  It will make a lot more sense that way, plus the end of Book Three will resonate much more.

Just trying to figure it all out.
View all posts by izzybella →
This entry was posted in Fiction, Mystery, paranormal, Posts by Izzy and tagged Charley Davidson, Darynda Jones, Third Grave Dead Ahead. Bookmark the permalink.